Listen now as Jared Tate fills us in on DigiByte, the blockchain juggernaut!

Are you ready for your world to be disrupted? Hang on tight because it's going to be. Blockchain is quickly infiltrating every kind of human interaction, from banking to real estate to healthcare to just about anything you can think of. My guest today is Jared Tate, founder and creator of DigiByte, the world's longest, fastest and most secure UTXO blockchain. Jared has been called a long-term visionary and technological genius, and after spending just 45 minutes with him, I agree. Blockchain is the future that we all need to know about, and this is a great place to start.

Click on either visual to watch our fascinating 45-minute conversation. 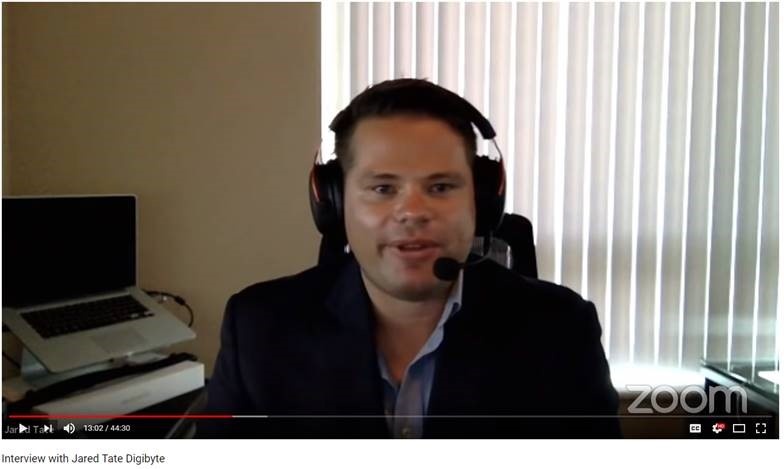 Don't miss a word! Get the transcript of my interview with Jared Tate here.

You'll be amazed at what's coming at us, fast. So much to learn!

So how does a blockchain actually work?

You may know a lot about blockchain or you may know next to nothing, but what I love about Jared's explanation is that it speaks to both. The way he describes blockchain to people is to imagine that you're in a restaurant and you take a 10-minute snapshot of everything everybody orders. Then you put that in an Excel spreadsheet in ledger format. That snapshot becomes what's known as a block, essentially, a block of data.

Now imagine that instead of just recording what everybody orders in that one restaurant—as well as the payments or transactions for those orders—you actually add in the transactions of everybody on the planet who has made an order in a restaurant. In the case of Bitcoin, you can actually go further out and get a snapshot of not only restaurants but anybody paying for anything anywhere.

Blockchain is like a living, breathing thing, Jared says. It's going to continue to evolve and can be used to secure everything from documents to healthcare records to insurance contracts, even the authenticity of photographs. You name it, it can basically scale infinitely. Wow!

And what is DigiByte?

Using DigiByte, you can send payments in a matter of seconds from the United States to someone in Australia or Europe or South America for a fraction of a cent. But the real utility of DigiByte is that it's a worldwide communications platform that's secured by the most advanced cryptography on the planet.

According to Jared, DigiByte is just in its infancy of what is actually going to be possible with this technology. There's so much more possible than simply making payments.

Originally from the very small town of Arco, Idaho, Jared has been involved with Bitcoin since 2012. In the Fall of 2013, he decided to make several improvements to the Bitcoin core protocol which culminated in the launch of DigiByte in 2014. DigiByte has pioneered many blockchain enhancements such as DigiShield, MultiShield and MultiAlgo which have all now been implemented by many other blockchains. DigiByte was also the first major blockchain to adopt SegWit.

In this podcast, Jared Tate and I talk about:

Want to get up to speed on blockchain? Check out these blogs and podcasts:

Resources mentioned in this episode: